Unlike most oil exporting countries, Iran is not solely dependent on its oil exports to produce revenues as it has a wide range of industries, particularly its vast mining industry, to help generate foreign exchange.
From a mining perspective, Iran is one of the top 15 mineral rich countries in the world. It addition to possessing vast oil and gas resources, Iran also has a wealth of mineral reserves in such commodities as coal, iron (the world’s 9th largest), copper (the world’s 9th largest), and lead and it possesses the world’s largest reserves in zinc. Iran also has mineral reserves in chromium, barite, salt, gypsum, molybdenum, gold and uranium (the world’s 10th largest).
In the production of steel, copper, and aluminum, Iran ranks 14th, 12th and 17th in the world respectively. Iran also produces other products such as pigment (Tio2), petroleum coke - both value-added products in the metal and mining sectors - and strategic materials like Rare Earth Elements.
Iran holds more than 7% of the world’s total mineral reserves and operates world class open-pit mines that include: Sar Cheshmeh Copper Mine in Kerman (the world’s 2nd largest copper deposit), the Anguran Zinc Mine in Zanjan, the Mehdi Abad Lead and Zinc Mine in Yazd (with a fixed capacity of 200 M tons of Sulfur and Oxide), the Sangan Iron Ore Mine in Khaf (one of the richest mines in the Middle Eastern region), and the Gole Gohar Iron Ore Mine in Sirjan (having over 900 years' history of extraction).
In recent years nearly 30% of Iran’s domestic investment was made in its mining sector. As a result, Iran has the infrastructure in place to accelerate project development due in part to its efficient network of electricity and readily accessible natural gas pipelines. This in addition to its experienced work force, low labor costs, rich coal, gas and energy resources, access to regional and international waterways and transport systems, all factors that contribute to its low cost of mineral production. The mining industry in Iran is also supported by the favorable regulations in place and the creation of special economic zones, all established to encourage resource exploration and development. These are just some of the advantages that lend proof that Iran is the best country for mining development in the region.
Since the implementation of the Joint Comprehensive Plan of Action, Iran has stepped up its efforts to establish lasting ties with the international community of investors, banks and financial institutions, contractors and suppliers and particularly those connected with the international oil, gas and mining industry to establish a new dialogue on ways we can work together. In keeping with the country’s Sixth Development Plan to be put in effect next March, Iran's goal is to reach a growth rate of 8% in its mining sector; to do so will require an investment of more than $40 billion.

IMIDRO is the executive arm of the Iranian government charged with extending sustainable development in the mining sector. Their activity plays a major role in the Iranian economy and it ranks among the top world-wide developmental organizations.
IMIDRO is Iran’s largest state holding in charge of planning new projects, allocating budgets, and making policies for all mines and the mining industry. Notwithstanding being a governmental organization, IMIDRO is flexible and free enough to establish business relations with foreign companies interested in a safe and reliable partnership in Iran’s mining and metal sector.
IMIDRO oversaw 1.5 million meters of exploration in the past 10 years at a cost of $730 million. Its recent plans are expected to result in further outstanding growth in mining exploration. In the first decade of its foundation, IMIDRO launched over 100 major mining projects with an income of over $12 billion and created over 100,000 job opportunities.
IMIDRO has three-fold strategies concerning empowerment, strategic guidance of the subsidiary companies, and development and renovation, whose development requires establishing business transactions on a global scale.
IMIDRO will, based on investor’s priorities and willingness, participate as a shareholder on behalf of the government in a JV Company to facilitate the approval process, receipt of licenses, as well as investment. Investors will be supported by IMIDRO in the process of obtaining support under the Foreign Investment Protection and Promotion Act (FIPPA), which is a guarantee from the Iranian government to protect the investors’ capital in case of any changes in laws and regulations and to ensure the return of revenue outside the country.
Considering the above facts and aims and under the patronage of IMIDRO, IICIC has the honor of inviting all national and international mining companies, investors, technology providers, suppliers, miners and government officials to attend the 2nd Iran Mines and Mining Industries Summit, which will be held on July 11-12, 2016 in Tehran, Iran, to hear more about the recent activities of the Iranian mining industry and the numerous available opportunities that exist here today.
To receive additional detailed information, please visit the Summit’s website: http://www.iicic.com/imis2016/, or contact:
Samaneh Samadi: This email address is being protected from spambots. You need JavaScript enabled to view it.
Farhad Harandi: This email address is being protected from spambots. You need JavaScript enabled to view it.
Tel:  +98 (21) 2203-7383
+98 (21) 2204-9052
Fax: +98 (21) 2204-4769 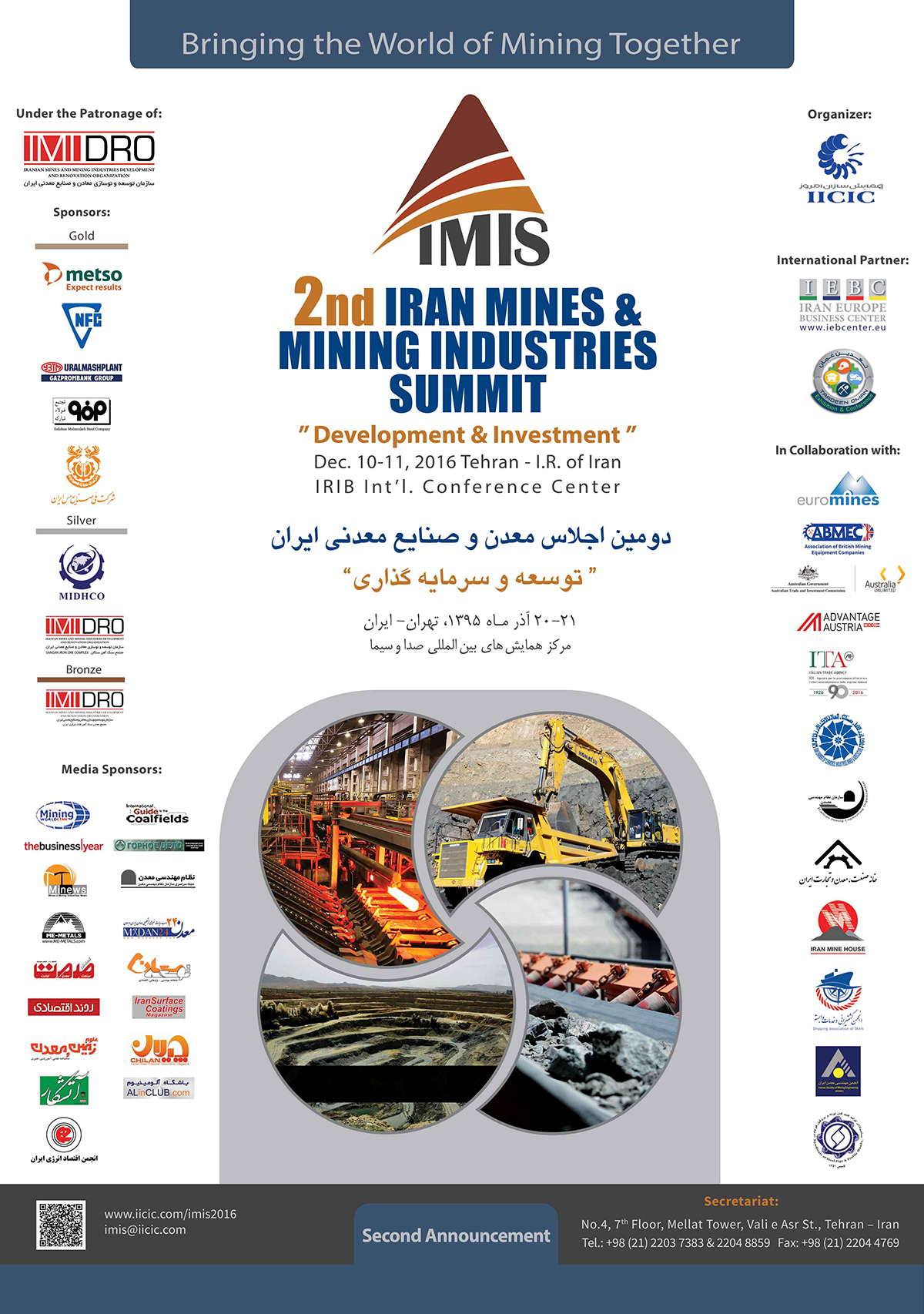